How to "Bake the Most" of Your Wheat: Why Protein Levels Matter 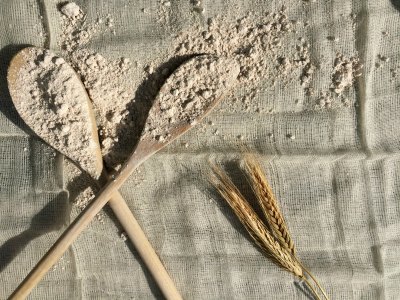 How to "Bake the Most" of Your Wheat: Why Protein Levels Matter

We talk a lot about using "quality" wheat in our flours, but how do we ensure the best possible organic products reach our customers?

It is the Miller’s job to transform the dormant wheat seed into flour so that it can be used by bakers and cooks to its full potential. Part of the craft includes knowing about different types of flour and how they will perform for the baker. Our Miller and President, Joe Lindley, has decades of experience listening to bakers and making flour that will help them bake more flavorful, nutritious, and consistent breads. Today, we are tackling protein, which is a common “measuring stick” for wheat. We will explain how the type and quality of protein in your flour can influence the bread you create.

The Lindley Legacy: Following In the Footsteps of our Ancestors

The Lindley Legacy: Following In the Footsteps of our Ancestors

This week, we have been sharing a series of blogs posts to commemorate the 235th anniversary of the Battle of Lindley’s mill, a Revolutionary War battle that happened on the same ground where our mill stands today. Learn more about the significance of the battle and see the entire series of articles on our blog, here. Today we would like to wrap up our week of reflection by sharing our thoughts on the traditions and values we’ve learned from our ancestors.

Tradition and values are an important part of the way we live our lives and the lens through which we do business. As we think about the products we’re providing to our friends and neighbors, we believe our ancestors would be proud of how we have continued milling with the traditions and values of their time. Our milling standard is high, but it’s simple. And it’s the same principle on which Lindley’s Mill was founded in 1755: We only produce high-quality milled products that we would want to eat, ourselves. The standards of quality are a blend of tradition, technology, and cutting-edge innovation. It’s the core of what we value, but here are other things we value, too.

Remembering the Early Millers who Shaped Our Local Community

Remembering the Early Millers who Shaped Our Local Community 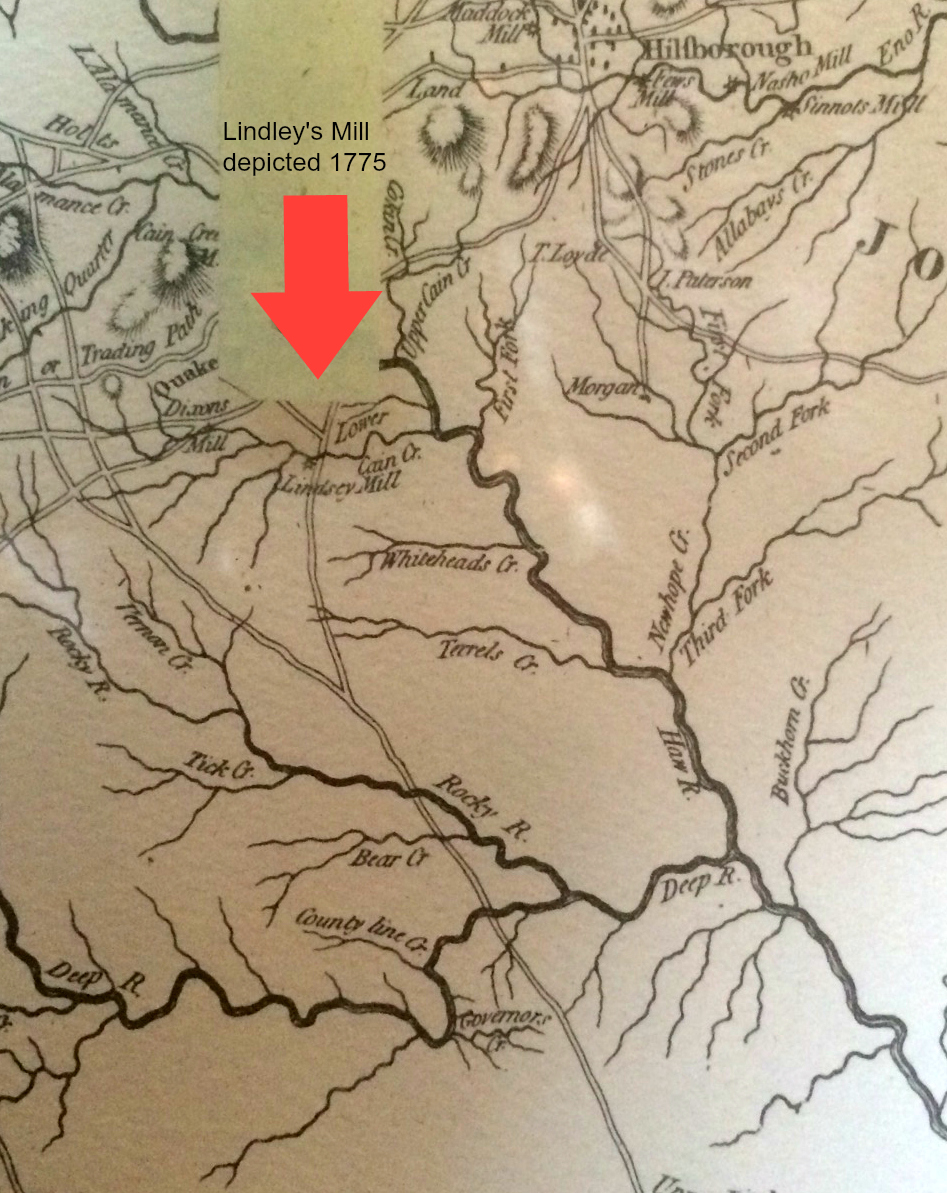 The deepest of our agricultural roots here in Alamance County reach back to the small Native American villages. The native people of the Haw River (the Sissipihaw) lived bountifully off the land in the North Carolina Piedmont through hunting, fishing and farming for thousands of years before the Europeans arrived.

When the first Europeans began to settle the area, they established family farms in the hilly and fertile soil of the region. Many Quakers of English and Irish descent, like our own Thomas Lindley, settled around the Cane Creek area near what is now called Snow Camp. These early settlers had to meet their basic needs of food, water, and shelter. They grew wheat, corn, oats, and rye successfully and soon gristmills popped up along Cane Creek in order to make flour to feed the community. Both the Haw River and Cane Creek were crucial to the agricultural (and later on) the textile industries of our region--both as a source of drinking water as well as a source of hydropower for the mills.

A Legacy of Liberty and Compassion: The Battle of Lindley's Mill 235 Years Later

A Legacy of Liberty and Compassion: The Battle of Lindley's Mill 235 Years Later 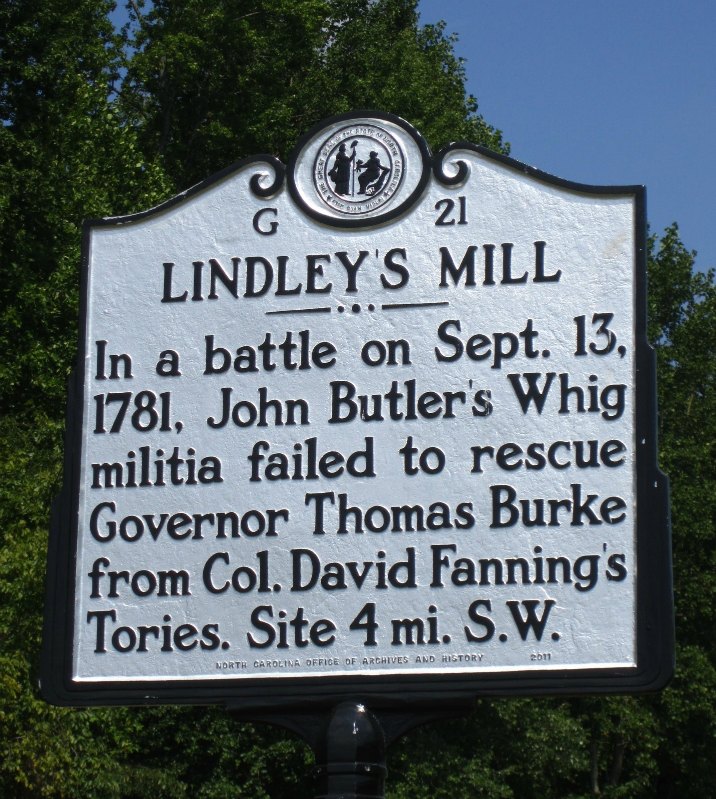 This week marks the 235th anniversary of the Battle of Lindley’s Mill, a story that captures the complex political climate brewing in North Carolina just before the official end of the American Revolution in 1781. The Battle at Lindley’s Mill, one of the bloodiest per capita of the Revolutionary War in North Carolina, reminds us of the sacrifices made for the liberties we enjoy today.

Aside from oral history, and the stories in the history books, the historical markers on the battlefield and a short distance away at the Spring Friends Quaker Meeting House are all that's left to commemorate the conflict. They read as follows: “On these grounds revolutionaries and loyalists were buried together in mass graves by people of this neighborhood who also cared for the wounded in their homes.” We continue to remember their courage and to tell the story so that current and future generations will know and be able to carry forward their legacies of liberty and compassion.

Look out for the rest of the posts in our series later on this week to take a step back in time with us as we remember our ties to the Revolutionary War.

Lindley Mills' founder and President, Joe Lindley, was hooked on the first flour he milled. From the beginning, he used his craft to provide the highest possible quality products to the bakers he served, giving them the best foundation for their artisan baking. Just as bakers must "listen to the bread" to adjust their recipes, we listen to the baker to deliver the flours they need for their own creations. Today's post is one in a series of "Customer Appreciation" blog posts, where we take a minute to thank the talented artisan and home bakers who enjoy using Lindley Mills' products.

Today we would like to thank Crisenbery Baking Company in Lebanon, Ohio for being a Lindley Mills customer.

Almost every American, young or old, has heard of Graham crackers. Many associate this staple food with warm memories of making s’mores around a campfire, or at home watching the marshmallow puff, brown, and melt through the window of a microwave oven. Yet, few Americans have ever heard of Graham flour or its inventor and namesake, Sylvester Graham (1794-1851).

Graham strongly believed that bread should be homemade, whole grain, and coarsely ground. He rallied for his cause by giving lectures and publishing articles on the Graham System for Living. Like every revolutionary thinker, he met resistance in his own time, but was generations ahead of society. The Graham System eschewed overly processed food, and advocated moderation in all areas of daily life, a familiar refrain for those “plugged-in” to discussions on food today. In many ways, today’s food revolution—which is inspired by contemporaries like Michael Pollan—whose message about how over processed and unwholesome foods are hurting us, was really started more than 100 years ago by Sylvester Graham.

Quick and Easy: Back to School Sprouted Whole Grain Pancakes with Super Sprout™

Quick and Easy: Back to School Sprouted Whole Grain Pancakes with Super Sprout™ 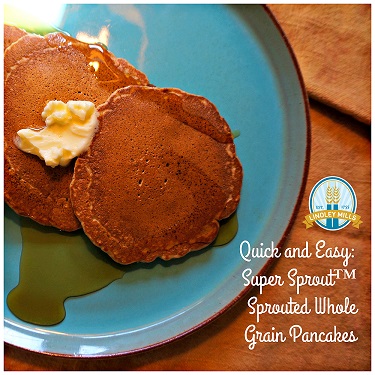 Make back to school breakfasts easy and healthy this year with Super Sprout™ Sprouted Whole Grain Wheat pancakes! These pancakes are a healthier and more flavorful option to other nutrient-lacking box mixes on the market.  In just minutes, you can whip up a batch of fluffy, naturally sweet and nutty tasting pancakes that your family will love!

Click on the "Read more" link below to get the full and printable version of the recipe!