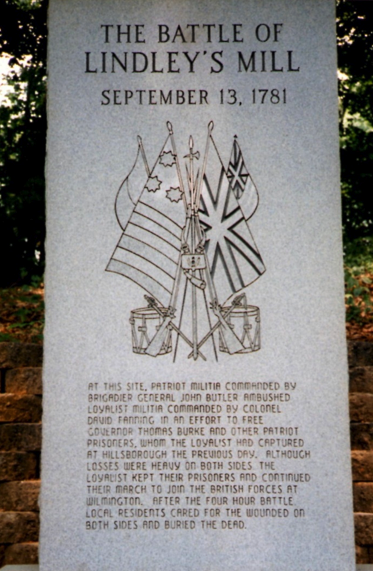 The Battle of Lindley's Mill on September 13, 1781 was the largest engagement of North Carolina's so-called Tory War, a prolonged civil conflict following Lord Charles Cornwallis' invasion of the state during the American Revolution. After Loyalist David Fanning's surprising victory on September 1 over superior forces at Bettis's Bridge, the Loyalists were encouraged to rally in large numbers. Fanning, a leader of the Loyalist militia, had received approval from Maj. James H. Craig, the British commander at Wilmington, for a raid on the state capital, then located in Hillsborough.

Fanning rendezvoused the troops, a total of 1,200 men. The Whigs were led to believe that the Loyalists would attack Gen. John Butler's militia camp on Deep River. Instead, Fanning's army was able to enter Hillsborough undetected in the foggy dawn of September 12. They quickly secured the town, capturing over 200 prisoners including Governor Thomas Burke. While plundering the town, Fanning's men opened its liquor stores and left around noon in a somewhat unruly column, bound for Wilmington via the Cape Fear road.

Receiving news of the disaster at Hillsborough, Butler rode immediately to intercept the Loyalist force where the Wilmington road crossed Cane Creek at the ford at Lindley's Mill in present day southern Alamance County. On a plateau overlooking Stafford's Branch, Butler and Col. Robert Mebane laid an ambush to stop the Loyalists and possibly recover the prisoners.

On the morning of September 13, as the unsuspecting vanguard of struggling Loyalists crossed the branch, a volley tore into their ranks, instantly killing McNeil and pinning down Capt. Archibald McKay's company of Highlanders. After securing the prisoners in the rear at Spring Friends Meetinghouse, Fanning rode forward to organize a flanking attack on the Whig position. Under assault from both front and rear, the Whigs stubbornly held their ground for several hours but were finally driven from the field. When he was seriously wounded in the arm late in the battle, Fanning gave the command to McDugald, who safely reached Wilmington with the prisoners. The killed and wounded, more than 250 on both sides, were buried and cared for by Quakers in the surrounding community. The hard-fought battle was the bloodiest of the war in North Carolina, with more casualties for the numbers engaged than the Battle of Guilford Courthouse.

The raid on Hillsborough and the subsequent battle proved to be a turning point. The Loyalists expected the Whigs to succumb to this double blow, but the effect was quite the opposite; incensed by the audacity of the raid and the loss of the battle, the Whigs redoubled their efforts to suppress the Loyalists and win the war.