This week marks the 235th anniversary of the Battle of Lindley’s Mill, a story that captures the complex political climate brewing in North Carolina just before the official end of the American Revolution in 1781. The Battle at Lindley’s Mill, one of the bloodiest per capita of the Revolutionary War in North Carolina, reminds us of the sacrifices made for the liberties we enjoy today. Look out for the rest of the posts in our series later on this week to take a step back in time with us as we remember our ties to the Revolutionary War.

Leading up to the Battle of Lindley's Mill

In 1781, the Revolutionary War was drawing to a close. It had been five long years since the Declaration of Independence was signed, and many colonists were probably ready to cease the fighting, but the conflict in North Carolina was not over yet. Hundreds of American lives were lost in drawn-out warfare on the red, Carolina clay. The battleground for the ongoing civil war between local patriots (Whigs) and British Loyalists (Tories) reached into farms and fields across the state.

General Lord Cornwallis led the British Tory army and had won a costly victory at the Battle of Guilford Courthouse on March 15th, 1781. While in North Carolina, Cornwallis stopped at Lindley’s Mill to requisition flour and took several wagonloads, probably at gunpoint, before the British army traveled on to stay in a neighbor's field. It wouldn’t be the last action that Lindley's Mill would see during the Revolutionary War, and few guessed that just a few months later, in September, the Whigs would attempt to rescue the Governor of North Carolina at the Battle of Lindley’s Mill. 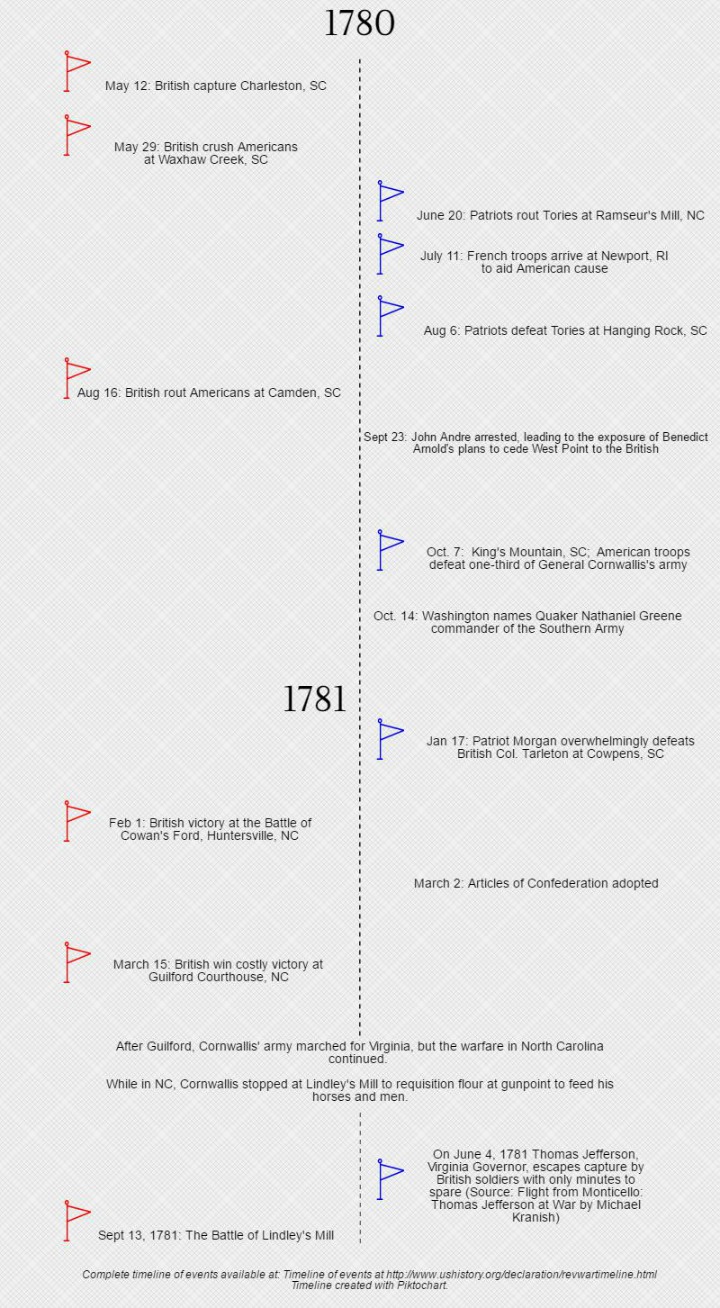 A War Within a War

Local Whigs and Tories formed armed militias who were often only loosely connected to the armies fighting in the war for independence. One of the most infamous Tory militia leaders was Colonel David Fanning.  His rise to power was marked by several imprisonments, escapes, and a militia force large enough to catch the attention of General Cornwallis. 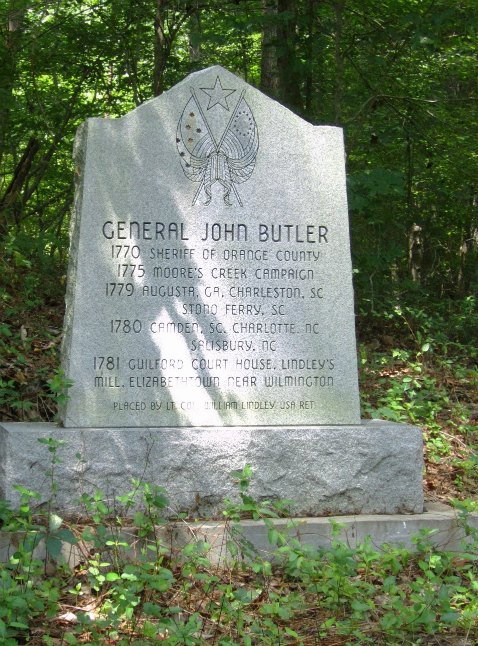 On September 12, 1781, Fanning captured NC Governor Thomas Burke and several members of the General Assembly in a raid on the capitol at Hillsborough. He was to deliver them to the British in Wilmington via the main road through the piedmont, which intersected with Cane Creek at the site of Lindley’s Mill.  Fanning's attack bore resemblance to the attempted capture of Virginia Governor, Thomas Jefferson, who narrowly escaped capture a few months earlier on June 4th. Arguably, if the British had been able to capture the Governors of both Virginia and North Carolina after their victory at Charleston, the Revolutionary War might have had a different ending.

A Rescue Mission at Lindley's Mill

On September 13, 1781, immediately upon receiving news of the attack and Governor’s capture at Hillsborough, Whig General John Butler and Col. Robert Mebane quickly organized a force of about 400 men and laid an ambush to stop the loyalists in their tracks. Crouched on the plateau overlooking the road to Wilmington and Cane Creek near Lindley’s Mill, Butler’s army waited for Tory troops to march around the corner and past their position. The ambush that followed lasted hours. Colonel Fanning and many others on both sides were injured while the prisoners were kept a short distance away at Spring Friends Quaker Meeting House. The Whigs, running short on gunpowder, had been urged to “take just what you need” and some accounts say that the lives of the prisoners were threatened. While the true details will remain unknown, eventually Butler retreated and allowed the loyalists to continue on the road to Wilmington with the prisoners in tow. It is said that nearby Stafford’s Branch, which feeds Cane Creek and crosses the road from Hillsborough, ran red with the blood of the fallen.

In the aftermath of the battle, local community members cared for the wounded, on both sides, and buried the dead. The community, made up primarily of tolerant and peaceful Quakers responded to the conflict by helping care for both forces of militiamen who survived one of the bloodiest battles in North Carolina. Colonel Fanning hid out in the area while he healed from his wounds and the Governor of North Carolina was eventually imprisoned in South Carolina by the British before escaping to return to his post in 1782. 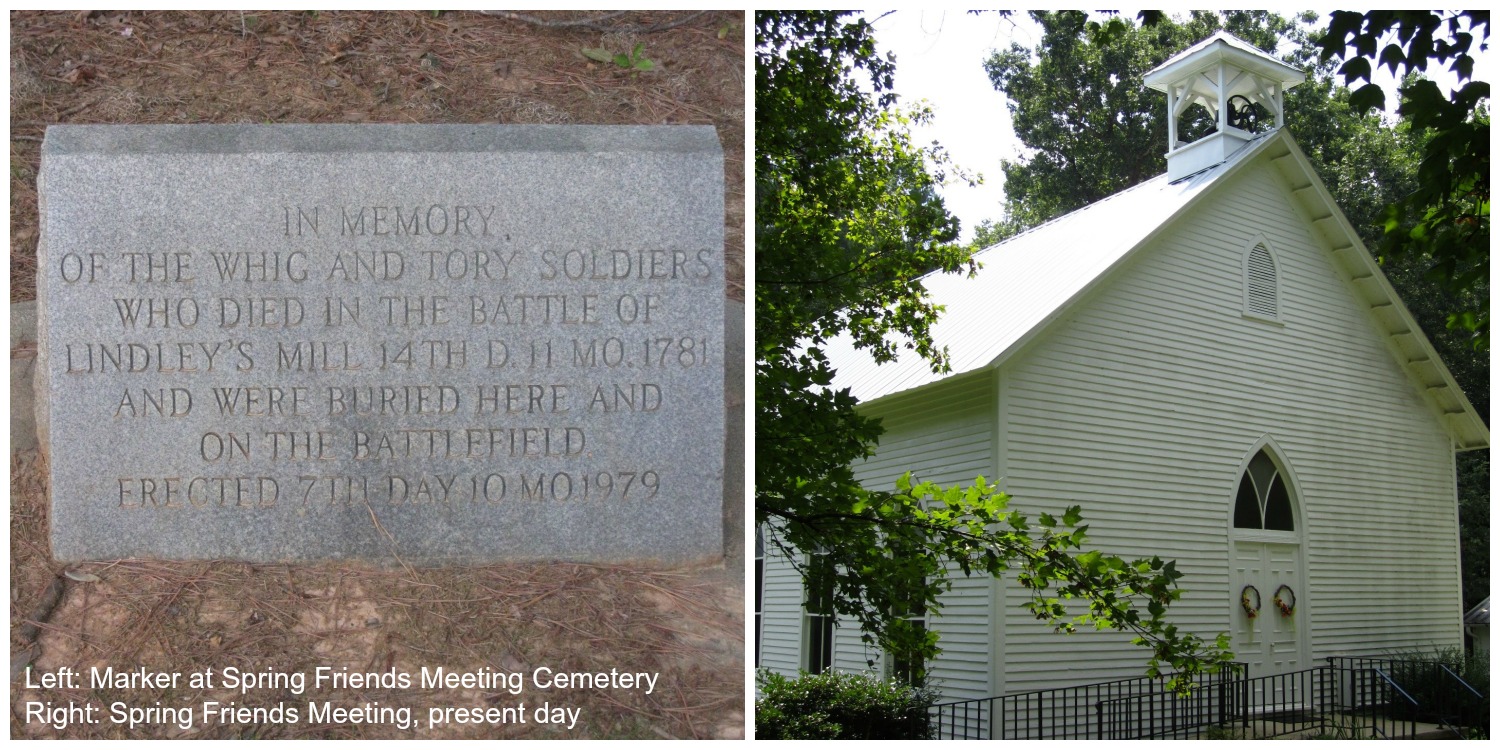 The raid on Hillsborough and the subsequent Battle at Lindley’s Mill proved to be a turning point in the political climate of the state. The Loyalists expected the Whigs to succumb to this double blow, but the effect was quite the opposite. Incensed by the audacity of the raid and the ensuing battle, the Whigs redoubled their efforts to suppress the Loyalists and win the war.

While today markers stand on the battlefield as silent reminders over those who fought for their beliefs at the Battle of Lindley’s Mill, few know about the strange coincidence that ties the mill even closer to the Battle. Thomas Lindley, the original founder of Lindley’s Mill, is said to have died either on the day-of or on the day after the Battle. He was a Quaker and had helped build Spring Friends Meeting House, where the prisoners were held during the fight. In 1781 he would have been in his late 70’s, an extraordinary lifetime for his generation. While it can be inferred that the stress of the nearby conflict, the threat to his family, and the security of his mill may have caused his death, he is not known to have been involved directly in the fight.

Today we remember those who paid the ultimate price for the freedoms we enjoy today, and those of our community who helped both Whigs and Tories in the days after the Battle. Aside from oral history, and the stories in the history books, the historical markers on the battlefield and at Spring Meeting House are all that's left to commemorate the conflict. They read as follows: “On these grounds revolutionaries and loyalists were buried together in mass graves by people of this neighborhood who also cared for the wounded in their homes.” We continue to remember their courage and to tell the story so that current and future generations will know and be able to carry forward their legacies of liberty and compassion.

6. Quaker.org, "Quakers and the Friends at the Spring." Available online here.

8. USHistory.org, "A Timeline of The Revolutionary War." Available online here.