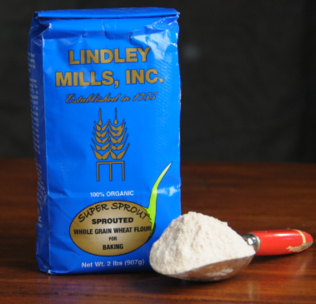 Jim Bolling from CHUBB Agribusiness recently paid a visit to Lindley Mills for a business meeting with President, Joe, Lindley. Jim is also an avid home-baker, and enjoys chatting with Joe about baking and milling. During his visit, Joe Lindley gave Jim a bag of Lindley Mills Super Sprout™ sprouted whole grain wheat flour to try out at home. Here is Jim's (and his gluten-intolerant friend's) testimonial about Super Sprout™:

At a recent business meeting with Joe Lindley, President of Lindley Mills in Graham, NC, I shared that I sometimes bake bread for friends to encourage them during difficult times, or for special occassions.  I told Joe about a certain friend who had been unable to eat the bread I gave her, because of her unfavorable reactions to any gluten products.  I asked him what grains he mills into flour that might be used to make bread she could eat.  I was expecting him to tell me about something made with spelt or another grain with which I was unfamiliar, but was surprised to hear his enthusiastic reply about an actual wheat product.  He explained that he had received glowing reports about his Super Sprout™ sprouted whole grain wheat flour, with the news that folks who can't handle gluten have eaten bread made with the flour with no repercussions.

I decided to try a simple yeast dinner roll recipe, using the Super Sprout™.  As Joe had indicated, the texture was different (from regular wheat flour), and it handled a little differently, but I was able to mix it to a consistency that allowed me to properly knead the dough.  After a rise, I punched it down, and found it quite easy to form into balls for my yeast rolls.  These were pan rolls, and I baked them in round aluminum cake pans.  I found that they required a slightly longer baking time than I had anticipated.  They browned a little on top, but weren't as brown on the bottom as I might have expected.  Since my wife doesn't like bread to be very brown on the bottom, this was a plus for me.  They remained soft on the bottom, but not too doughy.

At dinner, we hosted my sister-in-law, who, like my wife, is a bread-lover.  I explained that this was my first test using a new flour to make the yeast rolls and told them they were my taste-testers.  My wife's sister bit into one and grinned.  "These things are pretty good!", she quickly replied.  My wife responded similarly. "I could eat this whole pan," she quipped.  She showed restraint, however, (as did I!), so we were able to save some rolls for my gluten intolerant friend.

The next morning, at the Bible study I teach, I presented her with a small bag of rolls.  She knew Joe had given me something to try, and opened the bag to sniff.  She gleefully rolled her eyes back and smiled with pleasure, but hesitated when I told her they were made with sprouted wheat.  She explained that whenever she eats products made with wheat, she has almost an immediate, fairly severe reaction.  She made the decision to wait until she got home from church before taking a bite.

That evening, I received her report: "Wow!" The bread is delicious! It smells like real bread. It is textured like real bread...it is REAL bread! It's been over a year since I've had anything close.  Thank you so much for sharing.  All is good with my 'processing' so far, too."

Just to be sure, I checked-in with her the next day.  Here's what she said, "Since I don't consume wheat at all now, unless it's by accident, my system 'lets me know' immediately.  I have had no problems!"

It looks like Joe is really onto something with his Super Sprout™ sprouted whole grain wheat flour. Next up for me--my all-by-hand braided homemade yeast bread.  I can't wait to see how that one turns out!